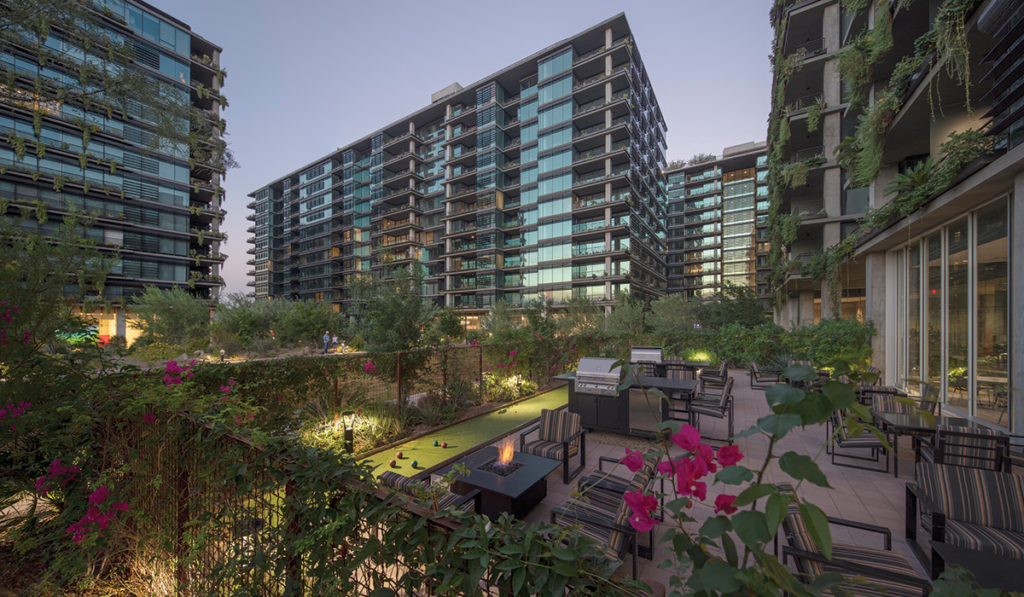 Sales at 7180 Optima Kierland, the newest tower within the $500 million Optima Kierland development from leading multifamily developer Optima, reached 85% last month as it averages 4.5 sales per month since January 2020, making it among the top two fastest-selling luxury condominium developments on the West Coast. That average is approximately five times greater than the rest of the market, where a typical new condominium development averages only 0.89 sales per month.

“Of the eight West Coast condo markets we track, Phoenix has proven to be the most resilient in the wake of COVID-19 and 7180 Optima Kierland stands out as the fastest-selling condominium community in the state of Arizona,” says Paul Zeger, partner of Polaris Pacific, a leading sales and marketing brokerage that tracks condominium market trends. “Compared to other urban cores such as Los Angeles and San Francisco, the Phoenix-metro market stayed more active during the months of the pandemic. Therefore, the area’s growth can be seen more like a continuation of pre-COVID trends rather than merely a rebound from depressed spring and summer sales volumes that many other West Coast cities had to overcome.”

With only 32 residences remaining for sale priced from the $500,000s to more than $2 million, 7180 Optima Kierland is comprised of 202 one-, two- and three-bedroom homes, plus a collection of premium penthouses perched atop the highest floor that will be unveiled in March 2021.

The biggest draw for buyers has been the array of lavish amenities, both on the rooftop and the ground level. Set atop the 12th floor is the spectacular Sky Deck, which was designed with a negative-edge view, with the railings lowered just beyond the sightline, so the eye goes straight to the vistas beyond and gives the sensation of floating above the city. Among the development’s other amenities for fitness, relaxation and entertainment, its Sky Deck offers residents Arizona’s first residential rooftop running track.

Among the building’s most unmistakable features is it’s next-generation vertical landscape system, with self-containing irrigation and drainage that enables a palette of vibrantly colored plants at the edge of each floor to grow both up and over the building. 7180 Optima Kierland displays the next evolution of Optima’s award-winning, green-building design created by David Hovey Jr., AIA, president and principal architect of Optima.

Did you Know: Optima is known for cutting-edge, residential buildings that have been nationally and internationally recognized with more than 75 prestigious awards for the company’s commitment to design, innovation and sustainability.

Features, amenities, floor plans, elevations, square footage and designs vary per plan and are subject to changes or substitution without prior notice. Actual finishes and materials installed in homes may differ from the materials depicted on this website or in the sales center. Natural materials like stone or wood typically are inconsistent and a variety of imperfections is to be expected. These inconsistencies and imperfections are normal and to be expected.

Plans and elevations are artist’s renderings only, may not accurately represent the actual condition of a home as constructed, and may contain options or furnishings which are not standard. We reserve the right to make changes to pricing, floor plans, specifications, dimensions and elevations without prior notice. Stated dimensions and square footage are approximate and should not be used as representation of the home’s precise or actual size. Any statement, verbal or written, regarding the square footage size of any home has been estimated and should not be construed to indicate certainty. Garage and/or parking space sizes depicted may vary from the final product and may not accommodate all vehicles.

Models/lifestyle photos do not reflect age, racial or ethnic preference.

This website and all materials contained herein, including but not limited to floor plans, images and elevations, are copyrighted and may not be distributed, modified, or reproduced in whole or in part without prior written permission. This website is provided as a service to Internet users and its use is a privilege to the viewer. All information is provided without warranty of any kind, either express or implied or for non-infringement. Access and use of the website and all company links are subject to the terms and conditions set forth herein and to all applicable laws regulating the use of the Internet and those relating to the use of information. The use of this website is also subject to all applicable laws involving copyrighted materials and intellectual property.

Site plans, community maps, photos and/or computer generated renderings have been posted on this site for illustration purposes only. All site plans, community maps, photos and computer generated renderings shown are conceptual in nature and are merely an artist’s rendition. They may not accurately represent the actual condition of the item being represented. All photos/videos shown depict the community or home as of the date taken. All Illustrations are solely for illustrative purposes and should never be relied upon.

This website does not share personal information with third parties nor do we store any information about your visit to this website other than to analyze and optimize your content and reading experience through the use of cookies. You can turn off the use of cookies at anytime by changing your specific browser settings. We are not responsible for republished content from this website or other websites without our permission.

Sales are conditioned upon buyer’s receipt and acceptance of ADRE Public Report.